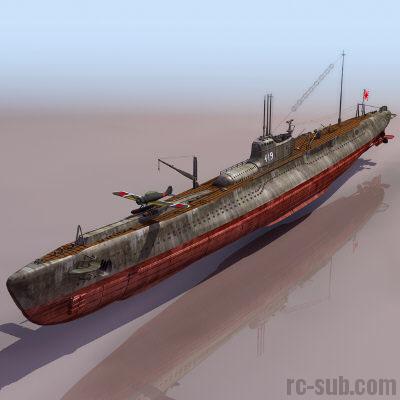 This page is dedicated to the construction and buildup of my 1:48 scale Scale Shipyard WWII Japanese B Class Submarine kit.

The kit was purchased from a fellow SubCommittee member in January of 2004. Completed, it should be over 89" long. Plans for this kit include working torpedoes.

This was the most numerous class of Japanese submarines. These boats were fast, long-ranged, and carried a seaplane, which could be launched on a forward catapult.

My model will completed as the I-26, a submarine which has particular significance to me.

The quiet solace of Estevan Point Lighthouse, a landmark only minutes from my home, was shattered on the evening of June 20, 1942 when a Japanese submarine surfaced in the darkness two miles off Estevan point.

The Japanese submarine I-26 fired between twenty-five and thirty rounds of 5.5 inch shells directly at the station. Fortunately the gunners had remarkably poor aim, missing the light station and the nearby settlement of Hesquiat.

Estevan Point went down in history as the first place where enemy shells had struck Canadian soil since 1812.

Accounts published after the war left no doubt that the shellfire came from a submarine's deck gun and Commander Yokota of the Japanese submarine I-26 freely admitted to the attack.

Although no casualties were reported, the event had serious repercussions for mariners on the west coast. The lights of the outer coast stations were turned off to prevent their use by submarines, virtually paralyzing the shipping that remained on the coast during the war years.

This sub kit was produced by the Scale Shipyard and is very monstrous in proportion, measuring almost seven and a half feet in length. With the sub kit came numerous scale drawings, fittings, and detail kits including a 1/48 Japanese float plane which would have been fitted to this sub during its operational time.

For now, this kit sits in my workshop awaiting my attention.